Jazz in our Postmodern Times

Right now it’s 10:30 and the Bill McHenry Quintet is between sets at the Village Vanguard in New York.

I’m not sure which is more amazing:

1) I’m watching it from Boston, and the audio is excellent.
2) There are records (famous, famous records we all have) with Paul Motion playing there in 1961 with Bill Evans and Scott LaFaro and he’s still playing there!  And he sounds good.  And he has developed his own concept for almost 50 years.
3) Andrew D’Angelo sounds killing.  That guy had cancer – brain cancer – and he’s still with us.

There was also a chat room where you could interact with the radio hosts and other viewers in real time, if that’s your thing.  And no one drink minimum at my house.  And I don’t have to figure out how to get home after the show. Thinking back to when I was back in high school, this sort of technology would have been almost totally unimaginable to me.  It would have all seemed like something out of Star Trek, yet here we are.

Did you miss it?  Bummer!  Fortunately, you can download (or stream or whatever) the audio from NPR’s website.  I’ll post the links in an update tomorrow.  Also, I’d recommend following Live at the Village Vanguard and the NPR jazz blog ( A Blog Supreme).  Next month they’re going to be broadcasting a set by the Fred Hirsch trio.  Hot damn!  There’s also a corresponding Flickr site

And what about the music?  It was fantastic!  I’m a big fan of Roses, Bill McHenry’s latest effort, and the most original moments of the broadcast – the new McHenry tunes – were the next logical step in that language.  Rubato, post-free jazz, which has unique forms and very thoughtful improvisation.  Maybe I’ll write more about this later, when I have more time. 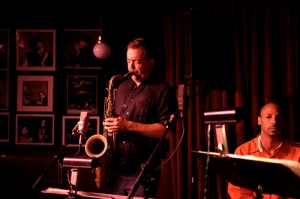