I originally performed Premonition in a very different sort of quartet with James Wylie, Assaf Shatil, and Scott Halligan during the Spring of 2009 (listen to the original version here).  It was a real pleasure to hear it played again by Mark, Rick, Sean, and Kathy.

Short Piece is brand new, written in late July and early August.  One day after one of their first rehearsals, Rick Stone and I were talking about the anxieties of writing for a group like the saxophone quartet.  Neither of us are “composers-with-a-capital-C”, and the notion of writing for a group without a rhythm section was quite daunting.  Rick mentioned that whatever he wrote would probably be short and not very good, so we challenged each other to write the shortest, most disappointing piece possible.  Such a notion is a very interesting tool to spur on creativity, and – ironically – I’m very happy with the result.  Rick’s piece was also totally rockin’.

Also, I’ve never not been involved with the performance of a piece of mine, and it was a very unusual sensation, to say the least, to hear my music played by other folks.  If you happen to be a member of a saxophone quartet, and you’re interested in performing one of these pieces, I’d be very happy to email you PDF files of the parts if you drop me a line.

As always, thank you for listening!

Recorded on July 12th, 2009 at a house party concert in Brookline, MA

Several Short Pieces/Just A Little Something

Enjoy Your Symptom! and the short tunes are improvisations.  Just a Little Something (sheet music, for those who are interested, is here) is a composition that I wrote for the occasion. 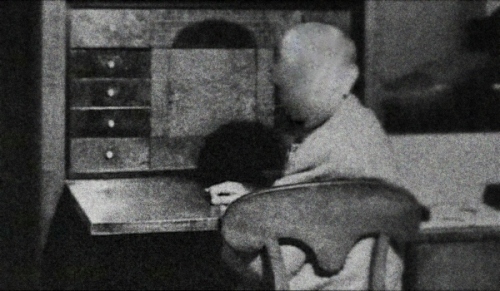 Here are tracks from my new trio’s most recent performance – at Rutman’s Violins on June 26th, 2009:

Thriving Off a Riff

A Shrug of the Shoulders (formerly “Piece for Trio”)

An Excuse for Laziness (formerly “Tapes”)

Recorded by Dan VanHassel (thanks Dan!)

If you’re interested in hearing more here are the same tunes, a few days earlier, in rehearsal.

A word or two about the compositions: the three tunes we played at the event were written specifically for that concert.  My goal was to strip back some of the layers of composition, in order to try to reveal the thing – or anything – that lies underneath.  From Godard’s movie My Life to Live: “A bird is an animal with an inside and an outside. Remove the outside, there’s the inside. Remove the inside and you see the soul.”  If you similarly remove the outside and inside of composition, what is the remainder?  This is my melancholy science.

Thriving Off a Riff is based on a Webern string quartet, but only in the loosest of terms.  Some of the pitch material is kept, and I try to maintain a similar sense of pacing and form.  The goal for me was to show, in some small way, the inadequacy of pitch as an expressive device.  That at a certain point, pitch fails to express some of the expressions that are most basic and essential for us to express.  I chose to base the piece after Webern because of his connection to and mastery of pitch, and to show that (if only to myself) there is more to his craft than the clever reordering of pitch rows.  This aspect – pitch – was the first compositional layer I chose to peel back.

A Shrug of the Shoulders is an attempt to give aesthetic weight to failure and incompetence, much in the same spirit as Samuel Beckett, whose words started this blog two months ago.  I’m interested in investigating the point at which virtuosity breaks down and becomes irrelevant to the musical goals.  The compositional challenge has an interesting proposal: how do you write music which remains interesting (or at least sympathetic) yet embraces failure?  Do you go for charming impotence, humorous ignorance, or (preferably) do you go for something deeper?  This aspect – virtuosity – was the second compositional layer I chose to peel back.

An Excuse for Laziness examines the metaphorical end-of-the-line for composition.  The compositional aspect, instead of relying on pitch or form or other written aspects, is based on orchestration – each player is limited to playing with certain cliche sounds from early jazz performance practice – and on the prerecorded tapes which James and Joe manipulate on old, barely functional tape players which they didn’t necessarily know how to operate.  My goal, in the loftiest and most pretentious way of putting it, was to try to capture an aural sense of oldness, to show that at the eleventh hour it is improssible to remain timelessly hip and that sooner or later everyone looks at least a little old-fashioned.  Was it a success?  Well, it’s a topic I’ll certainly have to come back to.  This aspect – composition, itself – was the third and last compositional layer I chose to peel back.

After all this: what remains?  I’m not yet sure.  Check out the tracks, and tell me what you think.

And, as if that wasn’t enough for me to blabber on about, here is my arrangement of Raffi’s Baby Beluga, which was performed by the Comprovised All-Stars:

Or, if you prefer:

I’m extremely grateful for all the wonderful performers that you hear on these tracks, and deserving of particular thanks is Travis Alford and Dan VanHassel for arranging the concert and inviting me to bring my weirdo stuff as well as Joe and James, who play so wonderfully (and musically!) on the trio tracks.

Thank you very much for listening!

On June 26th, I’ll be premiering a new project at Rutman’s Violins as part of Travis Alford’s Comprovised music series. It will feature James Wylie on saxophones and clarinet and Joe Moffett on trumpet (and Scott Halligan might join us if the stars align in our favor). We’re going to play music that addresses some of the ideas I’ve been tossing around in my head – this is the first group I’ve had that has nothing like a rhythm section, and I’m going to try to channel the sounds of early jazz.

Needless to say, I’m really excited to begin working again on something that’s my own thing.

Right now I’m trying to break the 10 minute mark as far as composition and form are concerned. All of my previous work really times out at 5 or 10 minutes – after that the composition looses steam. I’m trying right now to write music which could go on for twenty minutes and still be interesting.